It is SAQA Benefit Auction quilt making time. Each donated art quilt is 12"x12". Even before I finished last year's, I had the idea for this year's. 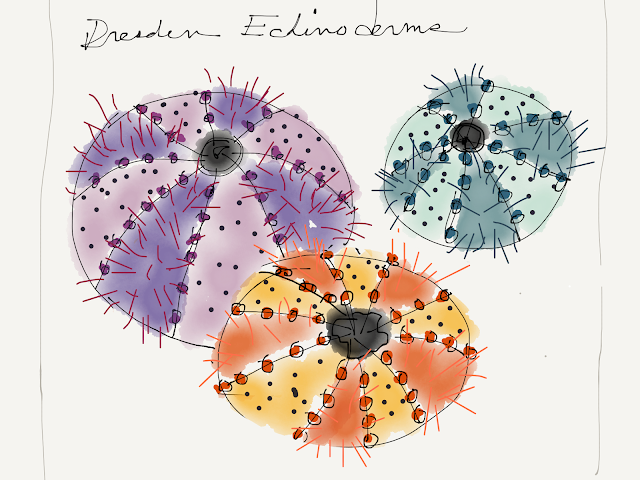 The individual urchins were each made as a separate unit, using templates and appli-piecing (Caryl Bryer Fallert-Gentry's method).

I auditioned several possible backgrounds, and settled on the yellow-ish batik. 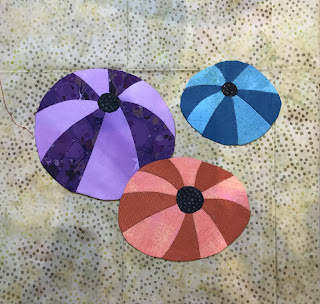 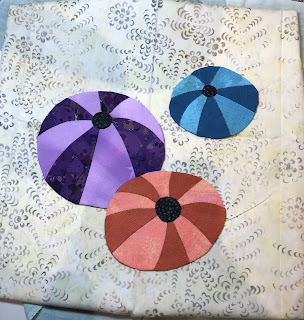 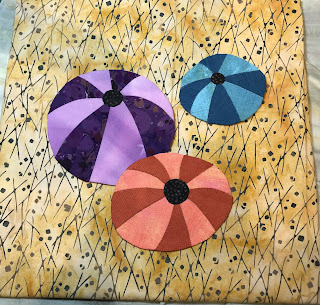 The urchins were positioned on the background, and machine appliqued in place. The top was  misty-fused to cotton batting, with extra wool trapunto under the urchins in preparation for hand stitching, which is much easier without the quilt back in place. Knots are easily buried in the batting from the back. I used hand-dyed #8 Perl cotton from Laura Wasilowski. After hand-stitching, I added the backing fabric and auditioned quilting ideas. 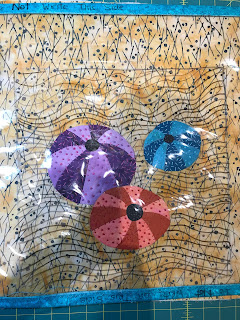 After quilting, it seemed like the quilt needed something -- maybe some little clumps of sea grass? This also shows auditioning green or black #5 Perl cotton to couch down in the ditch of the binding. Black won -- you don't really notice it, but it definitely adds something. 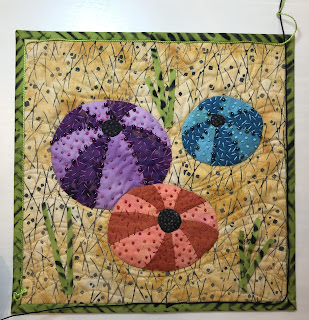 The final touch was hand stitching beads along the seam lines, like in the sketch. I had purple and blue beads in my stash but had to order the orangey-red ones. In fact, that is the only thing I bought -- everything else was selected from my stash. After beading, the white nylon beading thread was touched up with fabric markers to match the bead color.
Triangle corners on the back, with a slat (to be added) provide a hanging mechanism. The label was made by tracing computer lettering with Tsukineko ink and then hand stitching in place. Note how the zigzag stitching used to couch down the Perl cotton on the front just catches the edge and secures the binding on the back. 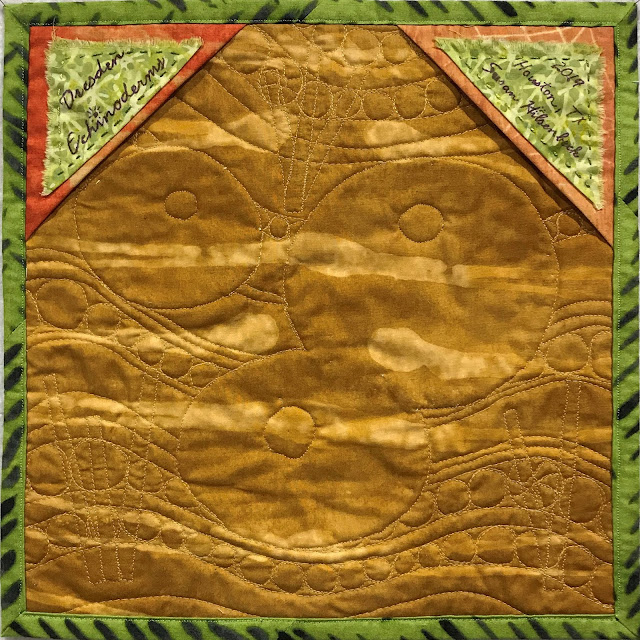 I love how this turned out -- it definitely matches my vision -- and was a lot of fun to make. Every step had lots of choices and challenges.

The auction will be open for bidding in September. Bid early and high. ;-)

Addendum: Unlike the urchin appliques, which were added to the top, the clumps of sea weed were added after the quilt was more or less finished and I forgot to change the bobbin from gray (used for piecing another project and shown on the right below) back to the yellow-ish color used for quilting (center below). It stuck like a sore thumb. As you can see, in the sample below (left), a little Tsukineko ink magic fixed the problem -- now you cannot tell. 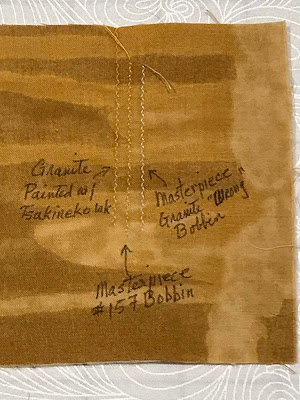 Update: The quilt did not sell in the main SAQA auction, but I found out at IQF Houston 2019 SAQA exhibit that it did sell in the online post-auction sale area. Yeah!!
Posted by shilsenbeck at 2:08 PM

shilsenbeck
My name is Susan Hilsenbeck. I've been quilting on and off since 1982. I'm especially interested in learning how to express myself, and in developing a bit as an artist. One of the things I like best about quilting, as a mode of expression, is the blend of analysis/engineering to figure how to put something together, and the freer, artistic side of design, composition, color, etc. It seems like the perfect mix for boths sides of my brain.